My dad has spent the last 12 nights in the hospital.  The urgency of the first days has given way to a different world where the hours, days, nights, even weeks seem to run together.

As much as we try to empathize with others, we never really know what they are feeling or thinking.  I do know what my dad has seen, heard, and had done to him since coming to the hospital.  I've taken a photograph of the view my dad has had continuously for the past ten days.  We've taken time to decorate the wall for him with the pictures we think he would most like. 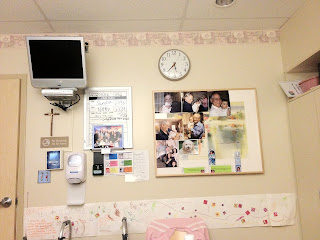 The view from my dad's hospital bed.


On the left is a group shot (taken on the cruise in December).  On the right is a grid of photos, arranged as follows:


I've spent more time with my father in the past two weeks than in any other two week period since I was a child living at home.  Over the years, we've talked work, family, and politics, but this is only the second time I can remember that every conversation and moment of silence we shared has been either about a single emotionally important event (in this case, dad's illness) or discussed with an unspoken awareness that we're not discussing that event.

The tenor is captured well by a conversation we had a week ago.  My dad was lying in the bed, covered with quite a few sheets.  He was shuffling his feet a bit, then stopped, looked over, and said "It's heavy."  I leaned in and asked "what's heavy?  The blankets?"  His response was "no, it's heavy, the stuff I'm thinking about."  I asked if he wanted to discuss it, and he said "not now".

His dry wit still shows.  A few days later, he was having a tough night, and I said "I'm sorry, dad.  I know this isn't how you would have wanted to spend your evening."  Without pause, he said "evenings".

Last night my dad said I could update his blog going forward, so I'm putting up this post to bring the blog up to date with what has gone on over the past two weeks.  First off, a technical note:  I found the long URL for this blog made it nearly impossible to get people to remember how to find my dad's blog.  Rather than keep telling them to "search Google for mcc and shuster", I created a new URL that redirects to it:  http://mcc.shuster.com/ The blog continues to be hosted on the old URL, but http://mcc.shuster.com/ takes you there.

Since I last updated the blog with the post "Dictated But Not Read", there have been a lot of changes, but the bottom line is that my dad's immediate condition is improved and we have no definitive data on what is going on with the cancer.

The initial issue with sepsis was probably caused by compromise to the immune system as a complication from the chemo with Topotecan. My dad's last blog post before going to the ER noted the various side effects of the Topotican, but noted that "With that parade of complaints, I am still optimistic that this drug, the Topo will kill enough tumor to allow me a remission, where I can have some snippets of normal life."  Nothing in the time between then and now has worsened the chances of that optimistic outcome.

While I don't have the blood counts from before he was hospitalized, I do have the counts for the last several days:


Dad was hospitalized on Feb. 19, so a week after his hospitalization, his counts had not yet recovered.  His immune system (apparently Neutrophil is a key thing) was essentially non-functional until 10 days after hospital admission, and not normal until 12 days after admission.  His blood (taken upon admission) was positive for gram positive cocci in clusters, and eventually cultured to show presence of a particular strain of staph.  He was given broad antibiotic coverage initially, then the coverage was reduced to target the identified strain of bacteria.  After he developed a new fever, his coverage was again broadened.

Dad was moved out of the ICU around midnight on Feb. 23.  He was moved into a regular room with neutropenic isolation because of the compromised immune system.  This meant lots of hand washing and wearing a mask.  Note to caregivers:  Do not try to drink hot tea with a mask on -- I did it twice before I realized I should just not bring drinks into the room.

Because it was unclear what the initial source of staph was, and because of concern that the port was either the cause of the infection or had become infected, the port was removed on Feb. 26.

His heart rate went from 80 to 90 around Feb. 26, then from 90 to 100 on Feb. 27.  On Feb. 28, he stayed awake from mid-afternoon more or less all night.  Around 2:30 am he developed sinus tach at 120 beats per minute, and around 3:00 am he developed atrial fibrillation at around 140 beats per minute.  When dad heard that, he said "oh shit".  Some say doctors make the worst patients, but I think it must be scariest for doctors when they are patients.  They know exactly what they should be scared of.

At that point, I called my mom and let her know what was going on.  I intended to let her know to come in early, but of course she instead decided to come in immediately.

They gave him an IV medication to restore normal rhythm, and his heart rhythm became normal and his rate dropped back to around 102 to 105 beats per minute.  The rate became normal shortly thereafter.  On top of everything else, his pain from the stent was spiking at that moment.  His temperature went from 38.1 to 37.7 back to 38.4 that night.  By the morning, his fever was down to 99.7 (yes, I'm aware that switching between centigrade and Fahrenheit is confusing) and his pulse was 89.

His antibiotic coverage was broadened, and his temperature returned to normal (or a bit below normal actually).  By February 29, his immune system had recovered enough to discontinue the isolation precautions.  Finally, I can sit next to him and smile without having a mask covering it all up.

On the morning on March 1, after a few days of rainy, cloudy weather, the sun rose to a beautiful purple sky that quickly transitioned to blue.  There were some clouds, but they were distant on the horizon.  It was an unexpected but wonderful metaphor.

There has been a lot of difficulty with IV lines.  After the port was removed, he needed to get PPN (the weaker version of TPN, IV nutrition) in a regular IV line.  This irritated his veins.  Same thing with some of the antibiotics.  He needed three IV lines at one point, but then one went bad.  He was suspecting it would go bad, and one night after starting the PPN in that IV line, he experienced a profound hot flush, lasting for about 5 minutes.  They pulled that IV.  Another IV went bad later that day.  They put in a new line.  The new line and the third "old" line went bad today.  He currently has only a single line.  There is an open question about whether or when they will put in a central line, such as a "PIC" line.

The pain from the stent has been continuous.  He had the stent removed at 3:00 p.m. today, March 2.  The removal went very well.  His esophagus was fully open.  The doctor reported seeing material that had the appearance of necrotic tumor.  He took a biopsy, and results of the biopsy should be available either Saturday or Monday.  The esophagus remaining fully open and the observation of potentially necrotic tumor are both positive signs.  The stent removal was just a few hours ago, so we don't yet know whether the esophagus will remain fully open.

I leave it to my dad to discuss his feelings about all of this, and I hope he will resume blogging soon.  I can say that he has experienced some days when he is very positive, and some days when he is very negative, and those feelings do not always correlate to how well he is doing physically.  There is a lot of uncertainty -- will his esophagus remain open?  Will his esophageal neuro-muscular function be good?  Will he be able to eat enough to get off of IV nutrition?  When will he get a PET scan?  What will it show?  What will the biopsy show?  What will it be like to go home?  How much care will he want?  If the tumor did shrink, what would another round of chemo be like?  Of course, there are also the important big picture questions.

Dad is still groggy from the anesthetic, but he reports a reduction in pain after removal of the stent.

Tonight my mom is staying at St. Agnes with dad.  My middle brother, Brian, goes in for surgery tomorrow afternoon (Saturday).  It is surgery for something causing esophageal issues.  My youngest brother, Michael, arrives tomorrow evening.  I expect to spend tomorrow night with my dad, and my mom expects to spend tomorrow night with Brian.  That is a whole lot of activity in a short period of time.  Thankfully, my wife has been amazing about watching the kids so I am free to be there for my dad.

Dad isn't yet feeling up to having visitors or taking calls.  He greatly appreciates all of the friendship and support.
Posted by Gary Shuster at 2:10 PM