Images from my CT. The Dilemma of Treatment 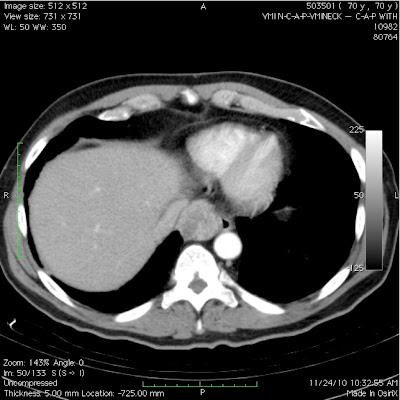 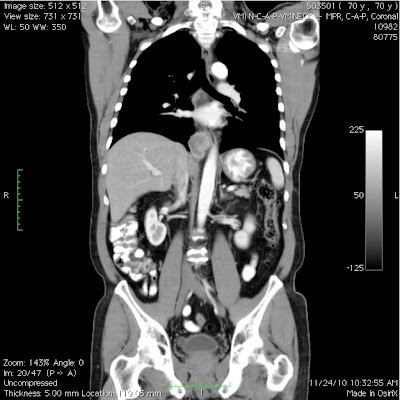 The axial image is above, the coronal below.The coronal image shows the mass almost in the midline above the diaphragm. The axial image shows the mass in front of the spine. The little black dot beside the mass is air in my esophagus.The mass is behind the heart and liver in the axial scan. A large radiation treatment poses a risk to my heart and spinal cord.
This is the only evidence of tumor. However the consensus is that there are likely othe microscopic foci of tumor and this is apparently something seen with MCC.
So what are the options?
Surgery is ruled out by everyone. It would be a horrendous operation for me, and not likely to offer enough chance of prolonged benefit to make it worthwhile.
Radiation treatment alone is a possibility, likely to obliterate this mass and I would likely avoid serious long term side effects.
Radiation preceded by chemotherapy. This is Dr Flam's suggestion. The chemo might shrink the tumor so the field if radiation could be decreased. Also, without radiation at the same tome, the effect of the chemo could be assessed. Chemo could possibly delay or prevent new metastases.
Radiation followed by chemotherapy. Hit it first with the best shot, and use chemo to try to clean up microscopic distant disease.
The problem with chemotherapy is that it reduces the immune response to the tumor. Even killing 99% of the tumor cells won't prevent recurrence if the immune system is crippled.
Dr Nghiem proposes a new treatment which has shown promise in animals, but I don't know if it has been tried in humans. Instead of 30 radiation treatments over 6 weeks, one triple shot given once. It would injure many cells rather than kill them. The hope is that these injured cells release antigens that the immune system will recognize as "not self" and create antibodies to kill the tumor cells all over the body.
There is little to lose with this approach. If it fails, the other possibilities above are still available, and in the meantime I may have several months of good quality of life. If it succeeds, I will be a pioneer patient.
Posted by docshu at 7:20 PM 2 comments:

Bad News on my PET/CT

Today, I went for a follow-up PET/CT. I have been feeling great, almost asymptomatic except for some dryness in my mouth and reduced taste sensation. I was optimistic that the scan would be normal and I could have a happy Thanksgiving and head off to my Hawaii cruise in a good frame of mind.
No such luck. The scans showed a mass in the posterior mediastinum measuring up to 4.5 cm, almost two inches in diameter. It is located just above the diaphragm behind the heart, next to the esophagus and spine, near the aorta. There was nothing there on my previous scan in June. The rest of this examination shows no evidence of significant abnormality elsewhere.
I put in a call for Dr Nghiem this afternoon, but it is Thanksgiving. I have an appointment to see him on Tuesday.
So what next? Surgery would be very difficult and dangerous,  painful with a long and arduous recovery and no real expectation of success. Chemo is an option. Radiation is another option. The latter seems more likely to be successful. I await word from the specialists.
I will post more in the next few days.
Posted by docshu at 8:20 PM 11 comments:

It is now about six months since I discovered my cancer. It appeared suddenly as a nodule in front of my left ear. After surgery and radiation, I am alive and feel well.
However there are residual symptoms. Taste is not completely restored. My mouth remains dry. My teeth have become sensitive. My left ear is numb. I have lost weight, about 15 pounds since May 2010. I was overweight so it is not all bad.
I have appointments for a follow-up PET/CT just before Thanksgiving and will visit Dr Nghiem in Seattle on November 30. Until then, without much to report, I will not be posting.
I have made some plans for the future. Assuming the best, that no new lesions show up, I will cut my work week to three afternoons per week and go to the gym for aerobic workouts 6 days per week. We will cruise to Hawaii for two weeks in December. We likely will cruise to Mexico in February and I will visit my mother early in March. We are trying to organize a family cruise in June, but I am not optimistic about that. The last time I tried that, I ended up paying for a cruise nobody took.
I thank the San Francisco Giants for distracting me during the worst times. I still can't believe they went all the way. 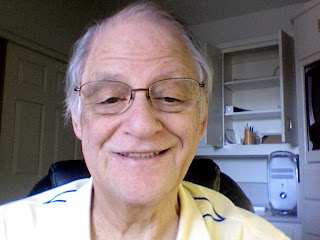 Here is another photo, taken today, showing no change.

I see today that there are three new victims of Merkel Cell Carcinoma added to the Google support group. I wish you all the best. My advise is to be a strong advocate for your own care. Find a physician who deals with this disease all the time. Learn all you can about the disease, and remember that the research and study is rapidly advancing and what may seem hopeless today, may be easily treated tomorrow.
Posted by docshu at 12:23 PM No comments: