Dad changed fundamentally in his two year battle with Merkel Cell Carcinoma.  He discovered the first lesion on May 6, 2010, almost exactly two years ago.  As he came to understand the profound danger he faced, he allowed things that didn't matter to simply fall away.  He got in touch with his love for his family in a way that was far more intense than before he started the battle.  He enjoyed every moment with his grandchildren.  He took his wife on cruise vacations as often as possible.  In the weeks before he passed away, he celebrated a grandchild's birthday and conducted a family Seder. 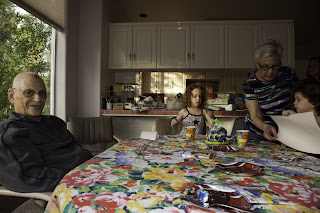 In facing death, dad decided to truly live his life.  I love how he embraced what is important, and allowed the distractions from a happy life to fall by the wayside.  None of us need to wait until we face a terminal illness to live the way dad lived his final years.

Dad left behind a great family, a family that will live a better life thanks to the legacy and lessons he leaves behind. 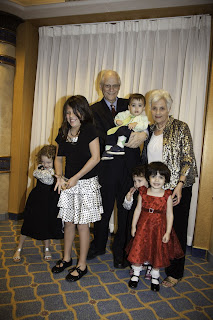 Grandma, Poppa, and their five grandchildren on the family cruise, December 2011 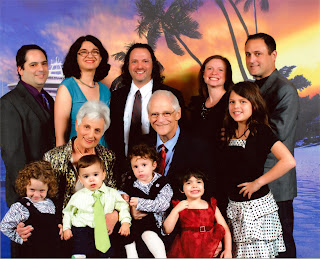 Dad and family on a cruise, December 2011

We each remember dad -- and allow that memory to enrich our lives -- in our own way.

His passing allowed me to reflect on whether I was the man he was, or at least the man I wanted to be.  Dad had always loomed large -- a man whose shoes I could never hope to fill.  He was a man who would hoist a canoe over beaver damns, a man who would step in to fix anything that went wrong, a man I turned to for rock solid advice.  He was in so many ways not just a father, but a father figure.  He was a hero to his mother when his father was sick and later died.  He was a hero and role model for his children.  Like any respected father figure, he cast quite a shadow.

Even to the end dad projected strength, regardless of the cancer's weakening of his body.

A few days after he passed away, I looked in his closet and was drawn to his shoes.  I had always assumed his feet were far bigger than mine, so I had trouble believing what I saw.  I stared for minutes.  His shoes looked the same size as mine.  And they were.  I sat down, picked out a pair of shoes I had seen him wear dozens of times, and put them on.  I literally filled his shoes.

I sat, reflected, and realized that dad may have passed away, but he left his children ready to take on the world.

Dad often listened to the Kingston Trio.  In the days after he died, I found myself tearing up when I played their song "Reverend Mr. Black":

It's been many years since we had to part. I guess I learned his ways by heart. I can still hear his sermon's ring, down in the valley where he used to sing. I followed him, yes, sir, and I don't regret it and I hope I will always be a credit to his memory 'cause I want you to understand. The Reverend Mr. Black was my old man! 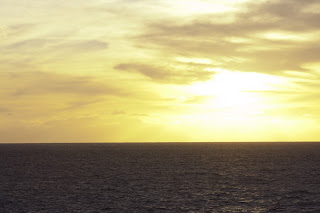 The sun sets during the last family vacation with dad, December 2011